Thank you for the provided details.

Could you please let us know if you have tried adjusting the touchpad settings or updating the mouse software on the Viewer's side?
Unfortunately, we cannot reproduce the issue which means that it only manifests itself in certain circumstances.

This is on a desktop PC to other Desktop PC's, no touchpad controls. Mouse is a Logitech M705. I'll let you know if I can reproduce on other PC's.

So then this pop up happens some time later

Yes, that one. I will stop using this feature.

I'm checking the host version (because its not shown in the Viewer, for example)

Actually, it's also possible to check the Host version in the Viewer if you switch to the Details view style:


Yes, that is my preferred view I use all the time but a lot of the hosts have blank boxes or out of date. I'm in the process of migrating to a new computer and have my new and old PC side by side. They are using same synchronized address books. Some don't show the same versions for the same hosts. Some don't show any version for some hosts in one viewer and not the other. It's not a reliable place to confirm actual versions. Right now, my new PC has yellow exclamation marks next to 5/7 cloud address books and the old PC, also running viewer 6.12.1, has no yellow exclamation marks on any of the address books.

Install RUT using a silent installer made against 6.10.3. When I went to add the code in 6.12.1, it said I needed to use the same Viewer version as what was used to generate it! Jeepers, that is another strike against the silent installer feature. If I had installed the silent installer, got home and then got this message without an opportunity to manually se t a new password so I could manually add to the Viewer, I probably would just give up on RUT right then and there and move to another solution. Try and only break backwards compatibility on major versions, not on minor versions, I beg you!

I apologize for the inconvenience. We try to maintain as much backward compatibility as possible with each update because we understand that our customers might not be able to update remote Hosts all at once. Besides, we even advise updating remote Hosts in small increments and first test the update procedure on a small sample. There is backward compatibility, however, it's always better to upgrade both Viewer and Host and avoid relying on it.

Now that you mention this, I somewhat recall this limitation when making the silent installer - it's just been so long ago that I last generated it that I forgot. I knew to migrate relay server settings, but on the Viewer side I was only thinking of synchronized address books and that didn't need to be backed up/restored when migrating Viewer PC's.  And now that I know that was the issue, the message pretty much says that, and I just didn't clue in. doh. Only thing to add to that help page, was that after I pasted over the keys.dat file, I had to close and reopen the Viewer to get the Add Code box to appear again. It was appearing before I pasted the keys.dat file but wouldn't appear again until I restarted the Viewer. Then I could add the code.

This is on a desktop PC to other Desktop PC's, no touchpad controls. Mouse is a Logitech M705. I'll let you know if I can reproduce on other PC's.

Of course, please feel free to update us if the issue can be reproduced on another machine or using another mouse.

Could you please clarify if you have logged on to these remote Hosts? Currently, information about the updated Host version becomes available in the address book during the Simple Update process, however, it's only confirmed after the Viewer logs in or connects to the remote Host.
In our future updates, we'll make the program update Hosts' version information immediately during the online status check without the user having to log in on the Hosts at all. Could you please check if logging on or connecting to the remote Host resolves the issue?

Thank you for your input. I will forward this to my coworkers and ask them to add the information about restarting the Viewer after copying the keys.dat file.

There must be an option to discard same screen shots in screen recorder.

I have seen this option in [censored].

You must add this option to save disk space and to limit log file size with respect to time.

It is very strange not to have this option.

Thank you for your suggestion.

I'll forward this to our development department for a review to see if we can add this feature in our future updates.

You must add this option to save disk space and to limit log file size with respect to time.

Actually, there is already a feature that allows limiting the size of created screenshots as well as specifying the life span of the screenshots. It can be set up in the Options menu of the Screen Recorder window, Settings tab, Limits section: 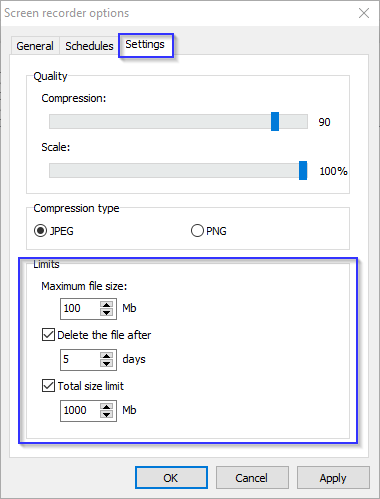 Support level: Free or trial
I did just try to upgrade from Host version 6.10.10 to 6.12 beta 2. Everything went far in that I can still connect fine and remote control works, but for some reason the image quality went way down: It seems that the screen from a 6.12 host is only sent in 256 colors rather than whatever is set in the connection properties (65536 by default on my setup, but as far as I can tell, that setting has no effect now). It seems that the fault lies with the Host (installable) rather than the viewer, because the 6.12 viewer displays fine when connected to 6.10.10, but once I upgrade the host to 6.12, I only get 256 colors.

Unfortunately, we couldn't reproduce the issue. Could you please provide us screenshots of the remote screen so the issue could be seen? Namely, the best screenshot would be the one captured in the Full Control window when connected to a remote Host, version 6.12 Beta 2 with an opened Properties window (it can be opened from Toolbar in the Full Control window), Color and CPU tab (for example please see the screenshot): 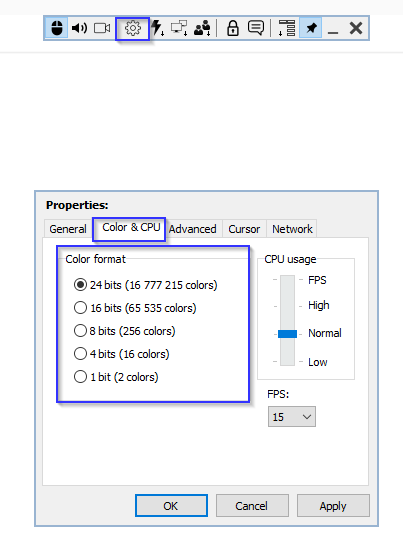 You can attach the screenshot here or send it to support@remoteutilities.com.

Support level: Free or trial
Screenshots sent. Note that before I installed beta, both directions looked the same, after discounting different screen sizes, of course.

Thank you for the provided screenshots.

I'll forward the issue to our development department and ask for their input on this.

I'll get back to you with their reply soon.

Thank you for your patience.

Let me know if the issue persists.

Support level: Free or trial
If I disable screen blanking, the colors are back to normal. Can the feature be fixed so that it supports blanking while keeping the colors?
Submit a reply
Page: