Support level: Pro
And we're back to being blocked. Defender just updated a few minutes ago, and immediately it killed the Viewer process. So looks like whatever MS has done yesterday, they undid it today.

Support level: Pro
Looks like the latest updates for Defender are allowing the Viewer to run in Windows 10.
Below is the current definition info:

Support level: Pro
I have the portable viewer on my work laptop (Win10 Pro) with Windows Defender. Today, all of a sudden, I couldn't launch the Viewer as it would close and disappear from my System Tray after double-clicking on it.  On a hunch, I checked Windows Defender, and sure enough there was a new detection, of the following virus: Trojan: Win32/Rundas!plock


So now I'm unable to launch my Viewer, as the process gets killed right away. And for some reason, I'm unable to make an exception for it in Windows Defender, which may be a Group Policy in my corporate Windows 10.

This trojan has been around most of 2016, and most people claim it's a false positive, but being unable to add an exception for the Viewer exe in Defender, I'm stuck with no remote access.

Support level: Pro
Remote Upgrade is not working, after downlading the updated Portable Viewer. I keep getting auth errors, even though I can do a Full remote session. I don't have time right now to mess with it, I will try again at home tonight.

Here are the errors I get:

Support level: Pro
You're killing me Conrad :) You should always update the version number. It prevents situations like this.
I'm using the Portable Viewer, so I will try download a fresh version. I did experience an issue with Remote Upgrade, so hopefully this will fix it.

Support level: Pro
Trying to use text chat from a Viewer 6.5.0.8 to a Host v6.5.0.5, both Windows 10. Using private Server.
When I'm in a session, and I click Chat in the Toolbar, it opens beside my session window. When I type into it, nothing is sent to the remote, with either pressing Enter key, or clicking Send button. Host and no chat window appears on the other side either. Experienced this with a Host v6.5.0.5 running on Windows 7 as well.

Tried upgrading the Host remotely to version 6.5.0.8, but it failed. I will update if I'm successful and if the upgrade has any effect on chat.

Support level: Pro
Restarting the viewer does not make any difference, the pop-ups keep coming.

Support level: Pro
The new viewer version on Windows 10 keeps popping up a notification that a host in online. I have turned off the notifications in the Viewer options, but seems to have no effect, they pop up anyway. 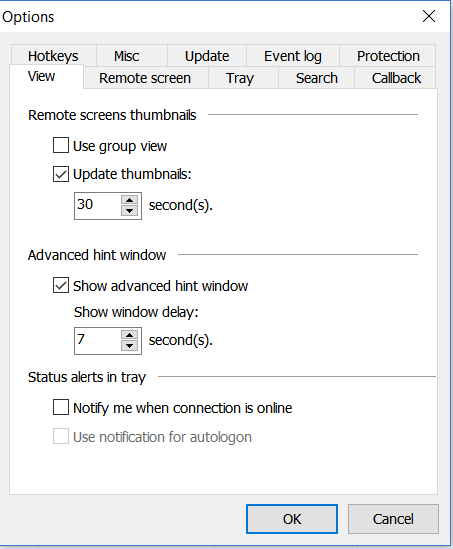 You mean you couldn't set the brightness using "hardware" buttons on the laptop? Could you tell the laptop brand/model?