Just testing 6.5 on Windows 10.  I see one of the improvements on 6.5 is that locking the screen and input (clicking the padlock on the viewer screen when connected to a host) is now supposed to work on Windows 10 hosts.  I am testing this on one computer that had the 6.3 host installed.  I did a remote install to upgrade it to 6.5 and rebooted it.  I did not see, as mentioned in the release notes for 6.5, anywhere to accept an additional driver.

Now when using this feature it seems to just do nothing (which is better than before when it would lock the remote computer).

What am I missing?

On the remote Host computer, can you access the Device Manager and check if you can locate the monitor lock driver as shown below: 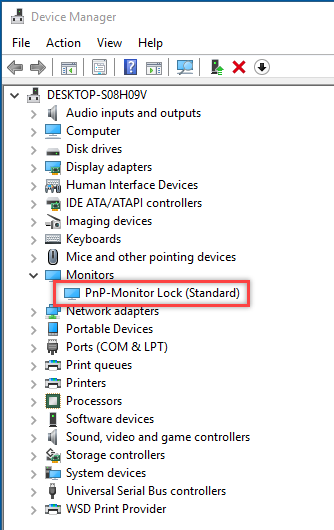 Support level: Pro
On the first computer it did not have the monitor driver.  I tried to do a remote install again but got an error that the install failed.  Tried to to remove Remote Utilities manually to try again but Windows 10 crashed. I'm getting a lot of Windows errors (not blaming RU, this machine was a little unstable to start with).

Tried on a second computer with a new Windows 10 install which also had some basics software installed - Office 2013, Flash, Firefox and RU 6.3.  After doing a remote install to upgrade this machine, it had a message on it saying "installing device" for about 20 minutes with no movement on the progress bar.

I got impatient and rebooted.  After rebooting I received some messages on the screen stating: WIndows cannot find 'igfxEM.exe' and ‘igfxHK.exe’.  I don’t know if installing the monitor driver is affecting these files.  Rebooting again did not reproduce those errors, but the monitor driver is still not there and the “blank Screen” does not work still.

I tried to install 6.508 manually on that computer.  First it said I needed to reboot, which I did.  Then the install continued after I logged back in, but I received an error 2753 that RUserv.exe is not marked for installation.

I’m not seeing RU in Windows Programs and Features to remove, so at the moment I can neither remove nor install Remote Utilities.

Indeed looks like something went wrong with the monitor driver installation. If you have trouble installing or uninstalling Host, try this Microsoft fixing tool https://support.microsoft.com/en-us/help/17588/fix-problems-that-block-programs-from-being-installed-or-removed .

If you don't find the Host in the list of programs that failed to uninstall, try selecting "Not listed" and specify the Host's GUID (Globally Unique Identifier) to uninstall manually. The Host's GUID for the current version 6.5.0.8 is:

Hope that helps.
Submit a reply