Support level: Starter
Thanks Conrad, will give it a go.

Support level: Starter
So upgraded a few hosts today, remotely via the Viewer console. We use AVAST Business at our location and got the following:

What should we be doing about this?

Support level: Starter
So windows released it's Fall update last month. The patch is called 20H2. Unfortunately, this did not resolve the video issues documented here in this posting.

Can we assume that the RemoteUtilities developers are unable to come up with a workaround?

Multi Monitor on remote and problems with Blank Screen

Support level: Starter
I think the issue is probably similar/same impact that I have of video partially messed up when a laptop lid is closed, and you remote into that laptop.

This all occurred when Microsoft pushed out the last patch for Windows 10 (Patch 2004). It fundamentally changed the way video was handled to some degree. The previous ticket is
Windows 10 - 2004 update patch issues

Can only hope that a subsequent/future patch resolves this or, RemoteUtilities comes up with a work-around.

So understanding that this may not be resolved, I did try the Classic Shell add-on/modification. A few things of note for others that attempt this and some general info if others need to take this path to get this to once-work again.

1) Classic Shell is no longer supported by the above-mentioned web link (the website does still work). The Developer decided to hang up his hat on this and make it Open-Source where others can still develop on it. The developer did state he would be taking down forums, etc. within 6 months of the announcement (now almost three years ago), so never know how long it will remain. Main page does have links to the Github location.

2) It is on Github and the name of the program has been changed to "OpenShell":
OpenShell on Github

For those wondering, yes, the current version on Github (4.4.152) does install successfully on WIndows 10, and does get around that annoying screen shrink issue that came with the latest/last patch from Microsoft, 2004 when using Remote Utilities on a Laptop, with the lid closed.

"Use legacy Capture mode" is still required in order to get around the black-screen issue also reported when lid-is-closed and Windows 10 has been patched to version 2004. OpenShell does not resolve that neither.

Finally, Microsoft's next update is expected around November, we'll see if there are any improvements that help out Remote Utilities.

Support level: Starter
Correct. Am aware of that legacy setting. The troubles started when Microsoft released they're April 2020 patch (MS calls it 2004). While legacy capture stopped the black screen effect, a new effect surface where A) the start menu size shrunk to very small text, and scroll boxes do not work (like the text image is frozen even though you can move the scroll bar down).

Hopefully, the developers can determine what changed in all of this to cause this new issue.

Support level: Starter
So the systems in reference are at a church (I volunteer as the "IT guy"). I had to go "on site" to take a look at the screens to see what they physically displayed. What I found was that the lids of the laptops are normally closed, so I have to open the lid to see the screen. What I found out is that this appears to be a condition that will cause the aforementioned issue.

When opening the lid, the screen comes on, and the menu etc all looks and performs normal. I remoted from another machine to test the laptops and confirmed, the screens work if the lid to the laptop is kept open however, if the lid is closed, and then I remote to the machine, the start menu (and scrolling issues) appear.

For the Dell Inspiron 5570 laptop associated video card, Device manager tells me it is an Intel UHD 620 adapter: 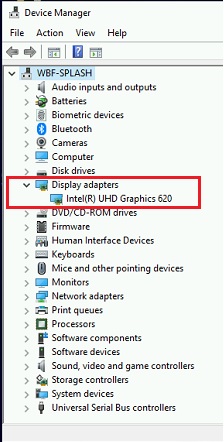 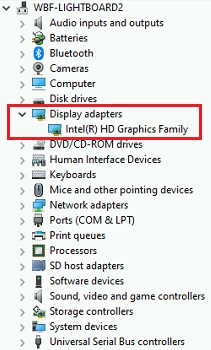 So, I am not sure what else to say here. Obviously orientation of the hardware (lid open versus closed) is what is affecting it, just not sure why this seem to appear after the 2004 update. Since most of my laptops are connected to a flat panel, they are left in the closed positions almost all the time.

Hate to bring this up again however, have another machine upgraded to the 2004 patch, with a Dell laptop that is new(er) (Inspiron 5570). Now exhibiting same.similar issues as with the older laptops mentioned earlier.
The Start menu is very small. 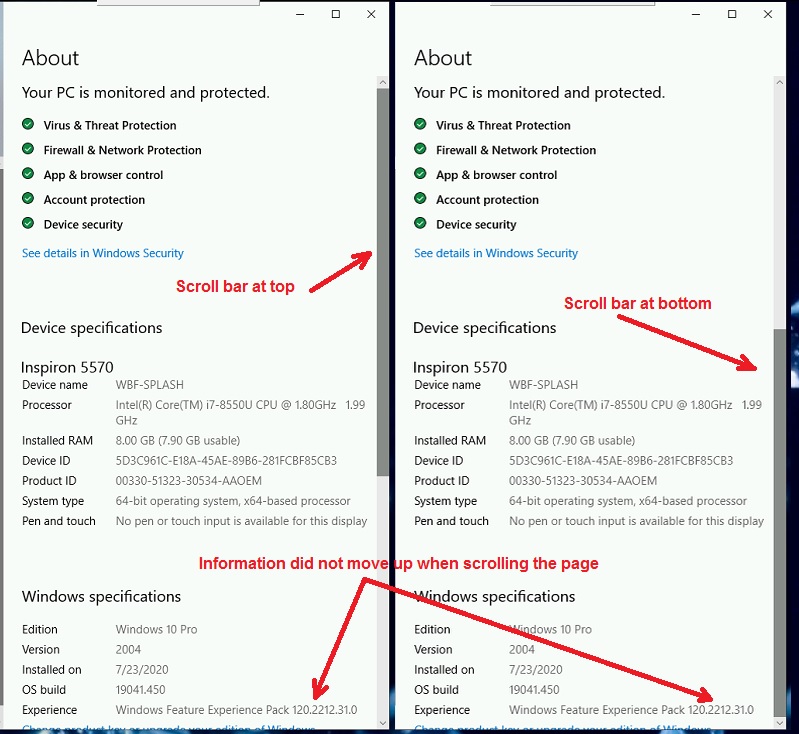 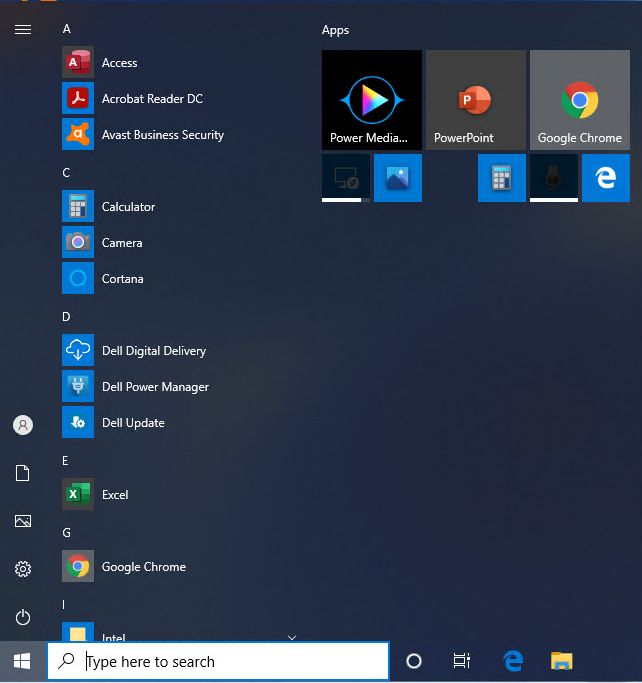 As well as scrolling: 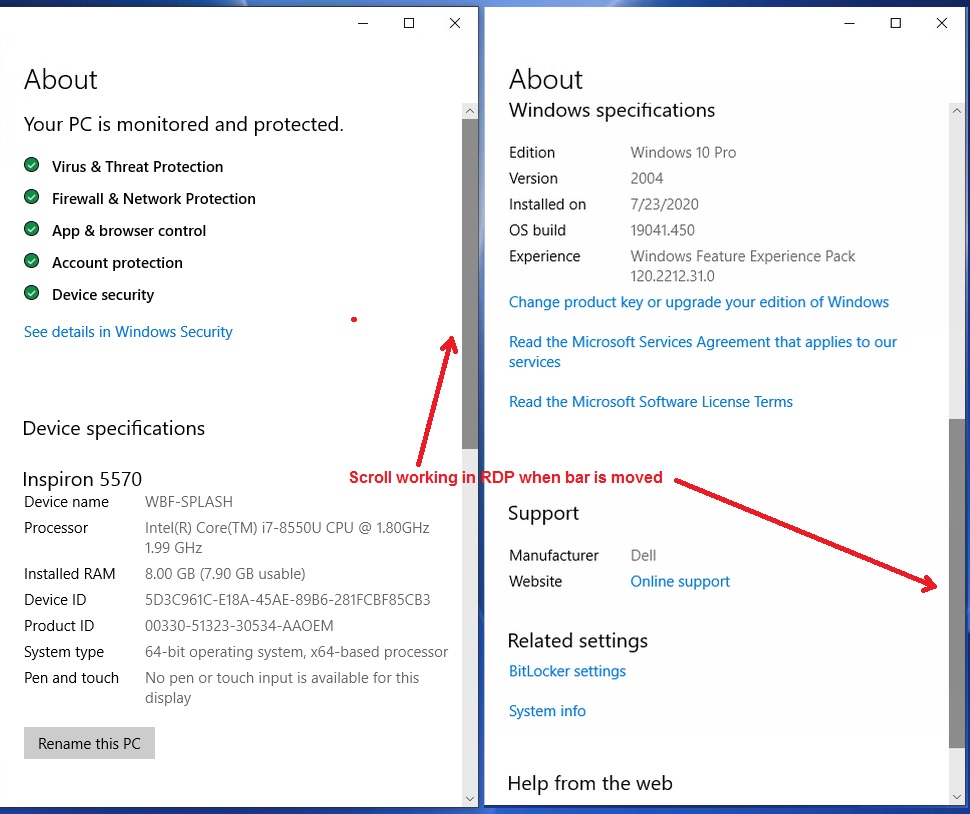 So for what it is worth, when this issue occurred, one of the things I did do was to wipe and reload Windows 10 fr om scratch. Updates ran that brought it up to 2004. So, something in the 2004 patch, along with the particular integrated display card is wh ere it all goes south.

What will be interesting is that I do have another identical laptop (latitude E5540) currently on Windows 7. I will be upgrading that as well to Windows 10, and will see if the same behaviour is exibited.