We are happy to announce a new release of Remote Utilities. This is mostly a bugfix update, but we have also made a few minor improvements.

Firstly the Modes tab in the Host security settings now works in a more intuitive way. Previously, in order to allow a certain connection mode you had to clear the corresponding checkbox in that tab. That was causing a lot of confusion among our users. After all, when a check box is checked it usually means the option is enabled.

Now, the check boxes on the Modes tab follow this convention. The modes that are checked are enabled/allowed: 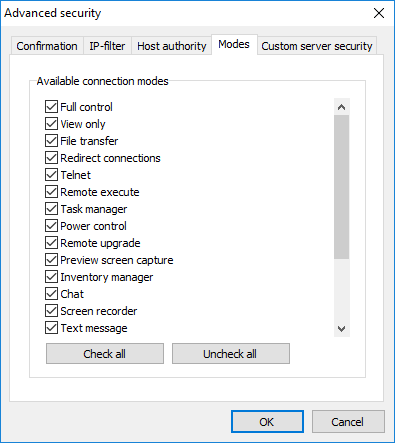 You shouldn’t worry about what happens with your existing selections on the Modes tab when you update. They will simply be inverted so that the allowed and blocked modes stay the same.

Secondly we added a minimize button to the Full Control mode toolbar. Now you can quickly minimize to your local desktop which is especially handy if you work in the fullscreen mode often.

Finally we have added RU Server Administration Console in the Viewer, so you can now administer your RU Server easily right from the Viewer PC:

The full list of fixes and improvements is available here.