A Brief Overview of the Windows Built In Firewall

Windows has had a built in firewall since Windows XP, and maintained that feature during transitions to Vista, Windows 7, and Windows 8. The goal of the firewall is to enhance security for users, particularly those who are not thoroughly experienced with potential online hazards. Some more advanced users consider the Windows firewall to be a bit too cumbersome. This guide will give you a quick rundown on the firewall and when it should and should not be used.

Different Version of the Built In Firewall

The Windows built in firewall has seen steady evolution since it began in XP. In a base install of Windows XP, the firewall blocks only inbound connections that have not been initiated by your computer, and the setting is turned off by default. Service Pack 2, however, turns on the firewall default and also gives administrators group control over the firewall. Vista saw additional filters put on the firewall, and Windows 7 and 8 have worked to provide the user with more control over what information you allow. This includes being able to designate different connections as either a home network, a work network, or a public network. 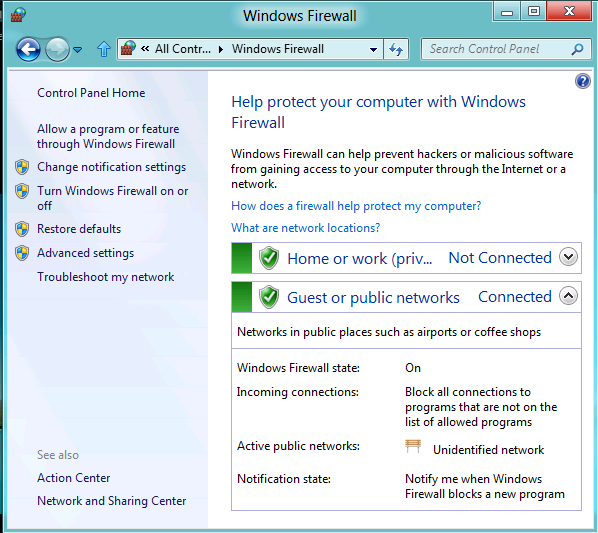 When to Use the Firewall

Users who are not highly experienced with online security or firewalls should probably have the Windows firewall turned on by default. If you have no firewall or a hardware firewall only (i.e., a firewall that controls transmissions between your router and the Internet), then the Windows built in firewall should be on. Hardware firewalls are effective against most things, but worms and viruses can exploit their weaknesses and slip by unless you have a software safety net. You should also make use of the Windows firewall if you have one or more laptops that come and go from your home or office. Anytime your laptop uses some other wireless connection, you might be in trouble without a firewall.

When not to Use the Firewall

The Windows firewall is a functional piece of protection, but there are other third party software firewalls that provide more comprehensive protection and customizability. If you already have access to one of those software firewalls, you can safely turn the Windows firewall off, since its features will be handled by that other program. However, if that third party firewall is only active when you are on a certain network, be sure to activate the Windows firewall if you bring your device to another location. Remember that anytime you access the Internet at a hotel, airport, or other public location, you are dealing with a whole new network that has its own vulnerabilities that you may be unaware of.

In short, the Windows built in firewall is something that is very useful if you have any sort of mobile device or rely on remote access to a server. It is less useful if you are on a network that uses an existing software firewall, but you should always remember to turn it back on if traveling. Unless you know what protection you have, Windows provides a very simple but functional line of defense against common viruses and worms.