Is P2P Networking Right for You?

What sort of networking is right for you? While most people in America access the Internet through a typical client-server model, there is another way. Peer-to-peer networking, often simply referred to as P2P, is a decentralized approach to networking in which network computers connect with other machines directly rather than using a central hub to access the worldwide web. What are the benefits and drawbacks to this approach? Read on to find out. 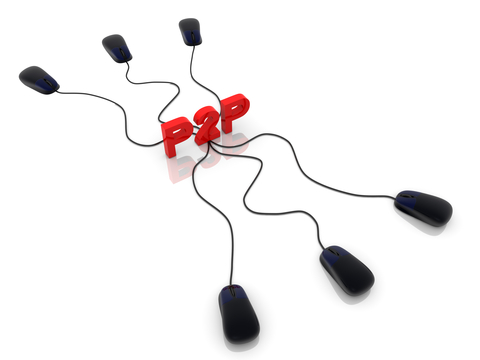 Odds are good that you’re already at least partially familiar with P2P networking. It is the default form of networking on small networks and is especially common as part of home networking. In these situations, the computers that are running the same network protocols are usually physically near each other, either in the same building or right next door. In this model, because there are so few computers, it’s easier for the computers to communicate directly with each other rather than go through a central hub first. To use an analogy, a P2P network is like calling to somebody in another room. If they’re nearby, it’s easier just to use your voice instead of looking for a phone and placing a call.

How Businesses Use P2P

Aside from its properties as a small network model, P2P finds itself utilized in several other ways by businesses of all sizes. The most infamous example of P2P would be the file-sharing network known as Napster, which was brought to the forefront of the news by litigation in the early 2000s. However, Napster used a model that many businesses can make use of by selling certain files and documents directly to clients. The issues that gave Napster trouble were matters of intellectual property, not the network itself. Many businesses also see P2P as an alternative to cloud computing or as a social tool, allowing users from outside the company to provide feedback that they normally wouldn’t be able to give.

Some businesses choose to focus on P2P networking because it offers several advantages over the typical client-server setup. The network is easier to install and configure without a central hub, and the need for a server is minimized because all business resources and content are shared by individual computers. Because the central dependency is eliminated, P2P tends to be more reliable than the alternative. The failure of one machine doesn’t stop the others from functioning. Finally, P2P networking can sometimes save money. Because each user on the network controls their own resources, there is less of a need for a full time system administrator.

If you want to maintain administrative control over your entire network, P2P might not be right for you. With a decentralized system, one person is unable to decide access for the entire network. In a P2P model, you should also make sure that all employees are well-versed in Internet safety, as it is easier to transmit viruses and spyware using this style of network. Finally, you may have difficulty recovering lost data or making comprehensive backups of everything on the network. The biggest strength of P2P networking is the ability to give more control to the individual employee, but that can also be a major weakness if you do not have well-educated and trustworthy individuals on your network.

Because licensed software tends to be more difficult to handle in a P2P networking model, many businesses that use this system look for open source software that can be acquired for free. As an example, most of the functionality of Microsoft Office is replicated by the open source program known as Open Office, which provides word processing, spreadsheet, HTML editing, and presentations. Surveys indicate that most companies using a P2P network at least consider the idea of using open source software, and almost nobody involved in that type of networking opposes the use of these software alternatives. If you are considering P2P, you might also want to look into open source software.

If you are interested in setting up a P2P network, you might be opening the door to a wide range of possibilities and improved efficiency as a whole. However, you should make sure to answer some simple questions first. What do you hope to gain from P2P? Does your business share the type of files that fit best with this style of networking? What are your plans for security and making backups? Answering these questions can put you well on the way to success.