Getting to Know your Network Topology

What is the shape of your business network? That may seem like an abstract question, since a typical network consists of machines located in many different areas, but there is more to it than you might think. Network topology refers to the general shape of how your computers and other network devices are interconnected. There are different levels of performance for each topology, and each arrangement has its own benefits and drawbacks to consider. 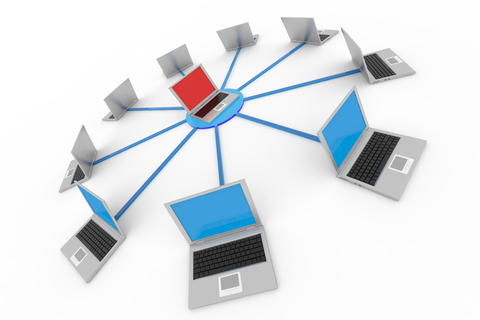 There are a few important terms you need to know before we continue. First is the term topology itself. While this usually refers to a physical or mathematical configuration, it takes on a slightly different meaning when it comes to computers. In networking, topology references the design of the network itself and the connection each computer has with the server. Other important terms include node, which is a device connected to your network, including computers. Finally, a packet is a message or bundle of information that gets sent from node to node. In addition to data, each packet also contains the address of the node which sent it and the address of the node it is being sent to.

In a bus setup, all the nodes on a network are connected to one single line. Everything sent along this line is viewable to every node. As a packet is sent across the network, every node examines it and checks to see if it is the device the information is intended for. If it is, the packet gets picked up by that node. If it isn’t, the node ignores it and lets the packet continue on its way. This is a simple setup that is easy to troubleshoot, but it can become cumbersome for large businesses. The more devices you have hooked up in a bus topology, the slower the network will be able to respond. The ideal maximum for a bus topology is about a dozen computers. More than that becomes cumbersome.

A star setup uses a central hub for all information and has each node connected directly to that hub, acting as points on the metaphorical star. This is preferable to the bus configuration if you are dealing with information that other devices shouldn’t be able to see. However, like a bus setup, the star configuration has its limits. More stress is placed on the hub as the number of points on the star increases, meaning that you will again encounter slowdown with more than a dozen machines or so. You can combat this slowdown a bit by either using a bus topology to connect several star setups or by daisy chaining multiple star networks together. This is a good solution if you want several mini-networks available.

In this configuration, a packet is sent from node to node. Each node checks to see if it is the intended recipient of the packet. If not, it passes the packet on to the next machine. There is a possibility in some cases that a packet will go through all nodes without getting picked up, in which case it goes back to the first node and begins cycling through them again. Ring topology doesn’t use a central hub as the connecting point for computers and was created relatively early in the life of the Internet. Because a central hub greatly improves efficiency, this is generally not a topology you will find in most business networks. However, a home network with only a few nodes might be able to use this setup well.

A mesh configuration for a network is usually ideal for very large businesses. In this layout, there are multiple routers connected to each other and to the nodes on the network. This is done so that if one router goes down, the connection is not delayed or lost. This is the most costly of the common topographies, since you need to purchase routers and cables for every computer on the network. As such it is less than ideal for small businesses but excellent for large companies that have a good number of resources. Use this configuration if you can’t afford to have your network down for a long period of time and if you have a large number of employees who need to be connected to each other.

The topography you choose for your network will depend on your business’s size, resources, and technological requirements. By knowing all of your options, you will be able to find the right fit for your company. As a bonus, you will also be able to diagnose common network problems more easily when they arise.